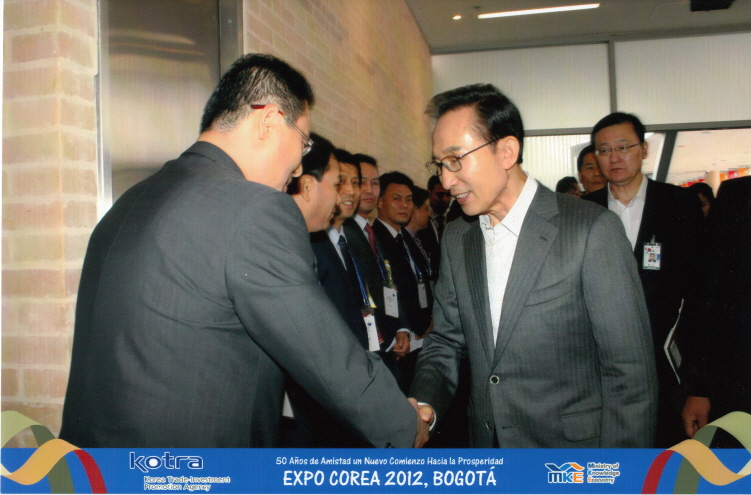 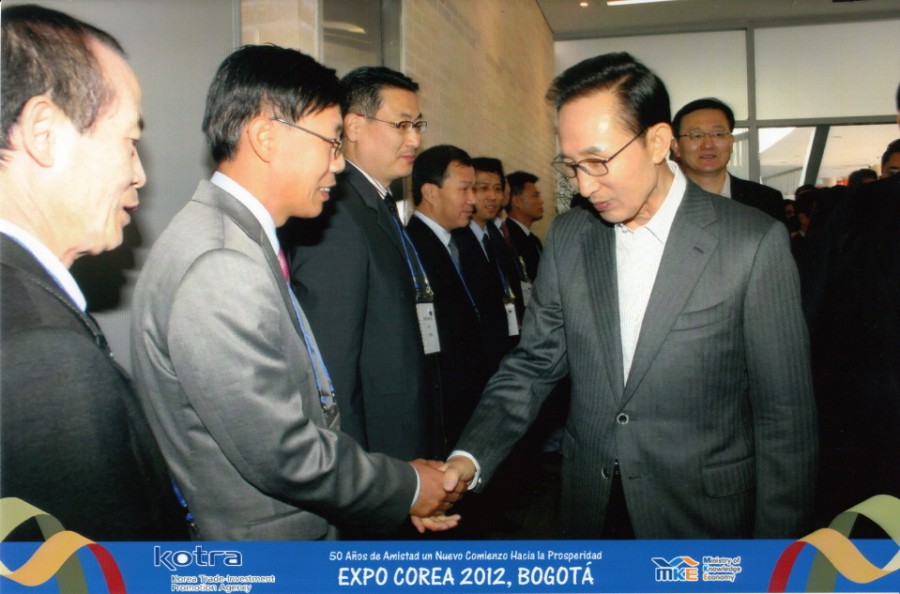 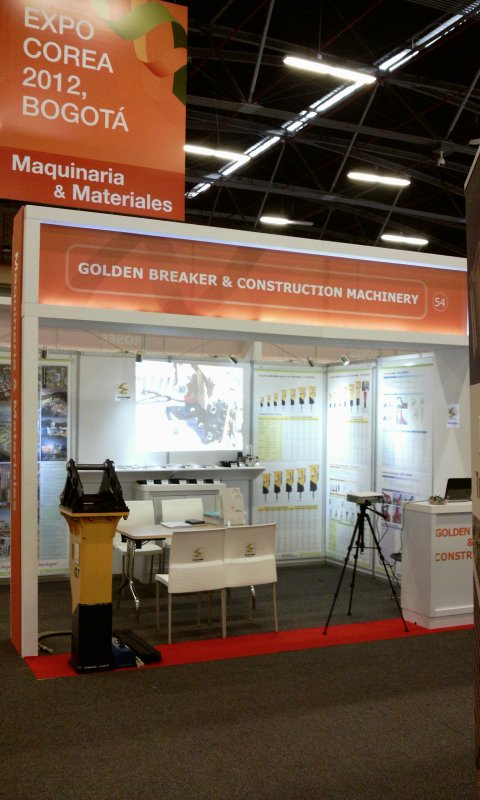 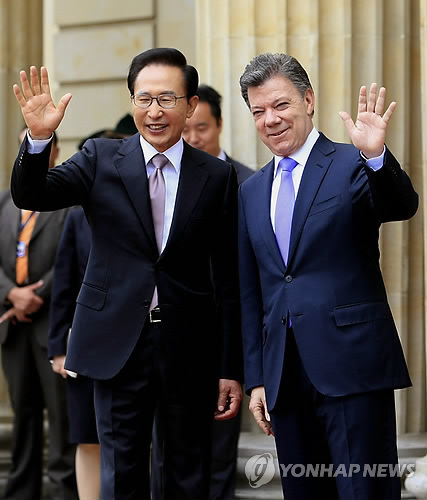 South Korean President, Lee Muyng-Bak (c), visits Expo Korea in Bogota, Colombia, on 24 June 2012. Myung-bak said during an interview with local media that the signing of the end of the negotiations of the Free Trade Agreement (FTA) scheduled for Monday in Bogota, his country could be the best partner of Colombia for their participation in the Asia-Pacific region.South Korean President Lee Myung-bak (L) and his Colombian counterpart Juan Manuel Santos (R) wave after the signing of a document to mark the end of the negotiations of a free trade agreement between both countries, at Narino Palace in Bogota, Colombia, 25 June 2012. South Korean and Colombian legislators will decide on the final approval of the text. EPA/Leonardo Munoz.EPA/Leonardo Muñoz

“The free trade agreement (FTA) between South Korea and Colombia will be a win-win opportunity for both parties,” said President Lee Myung-bak Sunday (local time) during his state visit to Colombia.

“The FTA will more than quintuple the bilateral trade volume over the next five years and encourage investments,” said Lee in an interview with El Tiempo, a leading local newspaper.

“The FTA will give more incentives for Korean firms to invest in Colombia, which will also gradually pave the road for greater technology transfers,” he added.

“Korea will use Colombia as a foothold to gain traction in the Latin American markets, while Colombia can likewise use Korea as its main base to penetrate into Asia,” said Lee. The successful conclusion of the trade deal can bridge the geographical distance between the two nations and converge us into a single economic zone, stressed Lee.

President Lee Myung-bak paid a visit to Korean Expo 2012 Bogota in Colombia on June 24 to meet with and encourage Korean and Colombian businessmen.

The Expo was organized to celebrate the 50th anniversary of the establishment of diplomatic ties between the two countries. From large corporations to smaller businesses, a total of 72 companies from the vehicle, textile, medical and electronic industries introduced their products at the Expo. A promotional booth was also set up to introduce Korean pop culture, including K-Pop, Korean dramas, games, and animations.

Touring Expo grounds, President Lee praised the participating Korean companies for their efforts and preparations leading up to the recent finalization of a Korea-Colombia FTA agreement. President Lee also stressed that trade should be expanded in balanced way and expressed his hope for further consolidation of cooperation with Colombia.

On the evening of the 24th, President Lee had the opportunity to meet with Koreans residing in Colombia.

President Lee explained that his visit to Colombia was especially significant, as it was the first visit to Colombia by a Korean head of state since the establishment of bilateral diplomatic relations in 1962. He also expressed admiration for the Korean community in Colombia as a notable example of overseas Koreans providing one another with support and creating a space for continued interaction.

With regards to the friendly partnership that Korea and Colombia have maintained since the Korean War, when the Colombian government sent over 5,000 troops to fight on behalf of the Republic of Korea, President Lee announced that the 50th anniversary of diplomatic ties would be an occasion to strengthen the relationship. He also called for the Korean people to work together to further develop the Korean community in Colombia as well as to promote bilateral cooperation.

The attendees expressed their gratitude for the president’s visit and asked for the continued support of the Korean government for the expansion of Korean language education in Colombia as well as for programs to encourage closer ties with the descendants of Colombian Korean War veterans.